Robert Suggs, ﻿﻿with a Friend﻿﻿
Owner

Robert remembers caring for the Dobermans that were being bred by his parents at 4 or 5 years old.  Robert showed obvious signs at an early age of his love for animals and their acceptance of him.  On weekends, holidays and after school he remembers taking care of the pets, when he was between 11- 15 years old and he learned to bathe and groom dogs then too.  Although he admits, he never did get paid then, he did learn a lot about taking care of pets and about the family business.  Every Christmas morning, Robert can be found at Suggs Kennels taking care of the pets before opening a single present.   But, Robert doesn’t mind, “the sacrifice that you make to take care of pets is enormous, because they need to be cared for first, before anything else.”   Robert’s philosophy is simple…'each pet is different and has different needs and they are very appreciative of everything you do for them.'  Most of what Robert knows about the care of animals is very instinctual for him as he can typically find fleas or ticks on pets that the owner did not know was there.   He is also considered an expert on dog behavior because he can read them and in return they respond well to him.  Robert wants potential new clients to know:  “that the kennel is a family business that has been in operation since 1963.  And, we keep a clean and safe environment for your pets and provide speedy service too. “
Gladys Suggs
President

Mrs. Suggs recalls, “We first started out breeding Dobermans, around 1959.  My husband, Cecile Eugene Suggs, was working full-time at the post office when a local veterinarian suggested, that because we had the room, that we begin taking in dogs for boarding.”  The Suggs also wanted something for their eldest son, who has a disability, to do something that would help him learn a skill and keep him busy.   Initially, they took care of a few dogs and then it spread by word of mouth.  In the years since, the initial Suggs Kennel building has been extended and a separate annex building was added on too.   A little skeptical initially about boarding pets, Mrs. Suggs didn’t think that people would bring them.   But, they did…and today 53 years later they are still happily taking in pets for boarding and grooming.

"Our Staff has been around animals for most of their lives and really love what they do!"
-Suggs Kennels 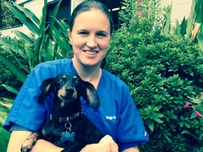 Has worked for Suggs Kennels since 2008. Ashley grew up with animals such as goats, cows, dogs, rabbits and chickens. She has a 3 year old Rottweiler named Hayley & recently added chickens to her family. Her passion is to play and work with animals.  She also likes to see the different personalities of animals and is a natural at working with them.
​